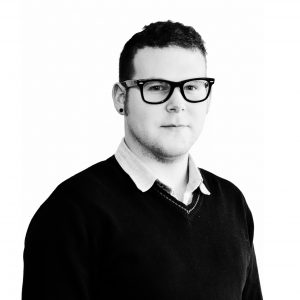 Michael David King is a writer, filmmaker, musician, and podcaster from Bangor, PA. Michael received a B.A. in English from William Paterson University in 2011, graduating Magna Cum Laude and joining the Alpha Epsilon Psi chapter of the International English Honor Society Sigma Tau Delta. In 2013 he produced Less Than Three, a successfully crowdfunded meta-dramedy that was selected to premiere at the Bergenfield Film Festival in May of that year. In 2016 he wrote and directed the three-minute short In Development, which premiered online that June. He also served as Music Editor for Lamplighter Magazine from 2012-2016, where he coordinated the release of four print issues, wrote numerous reviews and features, and produced multiple episodes of the monthly local music news series Lamplighter News.

Michael writes short stories, screenplays, film and music reviews, and the occasional Twitter rant. He also loves to rate, rank, and review films on Letterboxd. Currently, he is a co-host of the weekly drunk movie review podcast How Many Fingers Am I Holding Up?, as well as the lead vocalist and primary lyricist of NJ post-hardcore group My Eyes Fall Victim.

Michael continues to create in all four of his fields of interest. If you would like to commission Michael for original creative content in the fields of writing, film, or music, please visit the Services page. For interviews, appearances, and all other inquiries, please visit the Contact page.